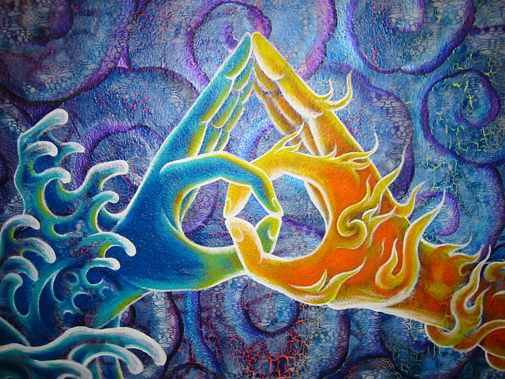 There are various issues we are facing up to right now, in our shared evolution with the Earth.
They are not new, by any stretch of the imagination but they are certainly critical.
One of the most crucial issues, is and has been from the beginning of time, the balance between the masculine and feminine energies.
Since the initial colonization of the Earth, beings from different parts of the galaxy came together on Earth and through their own internal unbalance, their feminine and masculine, the pattern was set.
Even though the baton has been passed back and forth, between males and females, every time, the pattern of unbalance has remained.
We have recently once passed the baton from the male consciousness to the female consciousness. We once more are attempting to bring balance to the many expressions of that consciousness.
The challenge, to own our personal power, in unconditional love and honoring of self and at the same time, of others is being tested.
Time and time again, our authenticity has been given a chance to actualize, but we have yet to allow ourselves to act on it, with it.
We mostly see it has the battle of the sexes, but it is so much more. It is first and foremost the female/male balance within each of us. It is the balance within the Earth itself. The balance between planets and stars. The balance between the galaxies.
It is the perfect battleground for tugs of war, of power, control, cruelty, submission, power give-a-way and much more.
It certainly breeds a sense of entitlement, a sense of loss of power, of disappointment and lack of self, amongst many other issues.
It is the absolute practice ground for the experimentation of co-creation.
Co-creation being one of the most important abilities we are experimenting and learning about right now.

Co-creation between male and female, between races, countries, haves and have-nots, parents and children, between friends, between lovers, between the various galactic races.

Relationships of any kind are fertile ground to exercise our muscle of co-creation.
And of course the more intimate the more fertile the ground is.
By intimate, I do not mean sexual, though that could be one of the expressions of intimacy.

By intimate, I mean the ability to stand completely opened and totally ‘naked’, in front of your own self. Or in front of any other, or others.

Can you do it?

And how can you possibly Co-create?

Your intimacy and your co-creation.
Truly intertwined.

Can you allow yourself to see? See yourself? Intimately? And than be willing to co-create?